The Akward Pervert with the Desperate Smile

The akward pervert with the desperate smile,
a bad dated haircut and no sense of style,
prolonged eye contact will make you want to run a mile,
lay face down on your bed, and simply weep for a while.

he isnt very subtle and hes always after friends,
he's got a well located flat where you can come and spend
lots of time listening to his really shit cds,
he'll take your off coat for you and brew you a cup of tea.


You know he gets nervous when you say youre going to leave,
and his smile slowly fades into an expression of unease.
He asks you what you're doing for the next day and the next
and you make up an excuse about your dog and the vet
and when you close the door and he stands there feeling vexed,
he punches the wall cos all he really wants is sex.


A thirty two year old virgin, he's only ever wanked,
when he finally pops his cherry heaven will receive his thanks
but with a shiny red demeanor and a face that says he's eager
and the desire to pull a teacher like a ravenous creature
who would simply squirt a litre, all over her neatest features,
when she goes to touch his t-shirt is repulsive like disease is!


So upon the disapointment displayed behind his glasses,
he scans the room to check out any other attractive arses
that are visually impaired from their amount of intoxication,
and the scene is looking good but he's getting no good vibrations
he approaches one girl in the middle of some blokes,
and she tells him to fuck off with a well-timed joke,
unluckily for him, he doesn't have a sense of humour
and his lingering presence goes down like news of tuma.


The girl feeling intimidated starts to shout,
and the bouncers cross the room to kick somebody out,
yet his face still shows a smile but with a shadow of a doubt
appearing in his eyes and at the corners of his mouth. 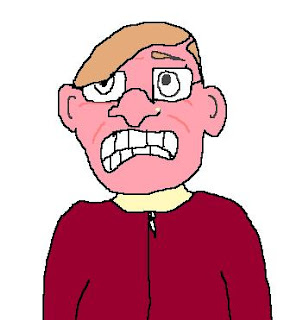